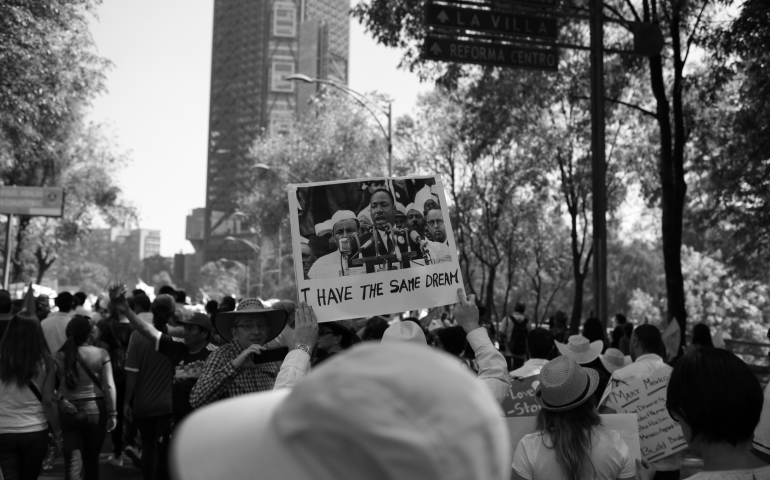 Every January, we celebrate Martin Luther King Jr. Day in the United States. This year, on the 21st, Southern Nazarene University (SNU) was closed to observe the federal holiday. While this one-day break is a nice way to get out of some classes on a Monday, the holiday is also meant to remember, celebrate and inspire others all around the country.

Throughout the SNU library, pamphlets were placed on the tables the week before MLK Day. On these pamphlets, some phrases from Martin Luther King Jr. were provided along with some questions that were intended to make the students of SNU think about the conditions of our world.

Along with famous quotes, the pamphlets invite the students to a Martin Luther King Coffee Shop Conversation for students to meet in the library coffee shop. Along with a free drink, students got to discuss some of Mr. King’s statements and how we can relate his mission of equality to issues found today.

On Thursday, the 17th, a group of about 15 students met along with several professors to have some conversations surrounding MLK and today’s issues. Led by Nate Goodwin, the Director for Intercultural Student Engagement, and Mike Wilson, Director for Intercultural Learning Opportunities, our group met with coffees in hand to sit down comfortably and have some honest and necessary conversations.

When speaking about the conversations that took place student Jalayna Liggins responded, “This talk was very important to me and helped stir up conversations that I have never felt comfortable having on SNU’s campus partially because I did not feel like it was an issue people found interest in here. I am beyond thankful for this, and it gives me hope that SNU is making steps toward becoming a place where everyone can belong and feel safe.”

Other ways to commemorate the holiday included participation in the Opening Ceremony and Silent March  and the MLK Jr. Holiday Parade. Hosted by the Martin Luther King Jr. Holiday Coalition. The parade stepped off at 2 p.m., and the theme of this year is We and CommUNITY.

Along with a map, you can find more event information on their website, http://okcmlk.org/events/parade/ along with the words “As your King Holiday Parade planners for over 30 years, we have worked diligently to make this event inclusive of all races, creeds and religions.” Not only is that inspiration for SNU students but also for all the citizens in the OKC area.

Junior Emma Schultheis attended the march along with several other SNU students. She said, “ It was so great to see so many people from Nazarene churches and SNU there with us at the march. People notice the kinds of people that show up to these events, and it is important to me that I am a part of them.”

Some other events in the OKC area included the Martin Luther King, Jr. Holiday Celebration at the Myriad Gardens. All of these events were held on Monday the 21st. Several SNU students headed that way to celebrate the MLK Day, and these are some great events that will hopefully happen again next year for students to join.

Martin Luther King Jr. was assassinated just 50 years ago. While his fight for civil rights has made a large headway in the United States, there are still necessary steps that need to be taken to have equality even in Bethany, Oklahoma.

Photo by Jerónimo Bernot on Unsplash