Every November 1st, some men and women around Southern Nazarene University’s (SNU) campus sport clean-shaven faces and legs in an effort to raise awareness for cancer by embracing the natural hair that many cancer patients lose.

This year, SNU will be putting a focus on raising money for cancer awareness. On November 1st, students had the opportunity to go the commons and sign up to participate in the No Shave November competition. There will be the following categories to participate in: Bushiest Beard, Mr. Patchy, Manstache, and Hairiest Legs.

For every person that wants to be a part of the fight for a cure, their picture will be taken, some men sporting babyfaces so that people can see their picture. Participants can then pledge a certain amount of money for their hair growth by the quarter inch.

Additionally, SNU and people involved in the competition can post links for others to pledge money to the cause. Just click on the link, choose who you want to support and choose the amount per quarter inch that you would like to pledge; it’s a simple task that supports an incredibly important cause.

The person who brings in the most money will also win a prize. Junior Sarah Gunter, who won hairiest legs in both 2016 and 2017 is competing again this year in order to defend her title. In reference to No Shave November, she says, “I think No Shave November is an important event at SNU because it encourages a little friendly competition, and if people do not want to be involved in other ways, then at least they can do this and maybe even win a gift card. This year, they’re introducing the pledge system to raise money for cancer research.”

Sadie Crouch, the Campus Ministries executive here on SNU’s campus, is very excited to see how people help this year both by growing their hair out and pledging money. In regards to pledging money, she says, “Anybody: professors, students, people’s families can go a pledge for every quarter inch a person grows. They can go through and pick what participant they want to support or sponsor, and then at Yule Feast, we will measure and reveal the winners” 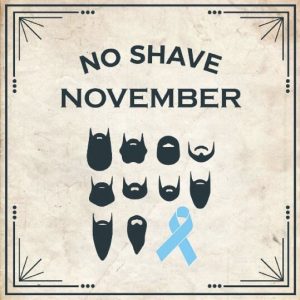 In case someone is wondering where all the pledged money goes, SGA’s website says that “All proceeds will go to the Prevent Cancer Foundation, Fight Colorectal Cancer and St. Jude’s Children’s Research Hospital.”

Tis’ the season to let it grow. Keep an eye out during this thankful month for your friends here on SNU’s campus that are participating in No Shave November. Spread the word and, if possible, even sponsor them. This is an easy and fun way for our school to make an impact on other people. If that is not your motivation, there’s always a chance to win a gift card.