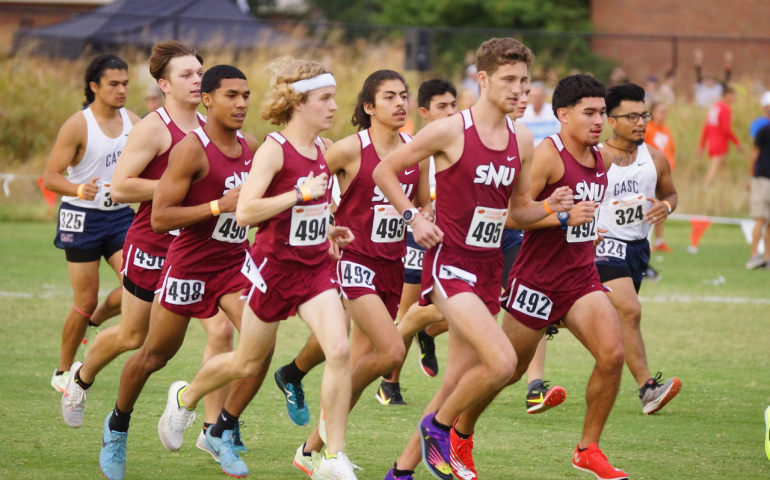 Over the weekend, the Southern Nazarene University cross country team traveled to Stillwater, Oklahoma for a meet titled the “Cowboy Jamboree.” The Cowboy Jamboree is the oldest cross-country meet in America, this year being the 84th iteration of the race, and it is considered the premier meet in all of the collegiate cross-countries. It was held on the relatively new the Greiner Family Cross Country Course at Oklahoma State University. At this particular meet, eight out of the ten nationally ranked Division I cross-country programs were in attendance.

I found it amazing to run alongside Division I schools as, prior to this, I had only heard and seen their names on television. It was also interesting to see just how much of a difference there was between us and the actual cream of the crop in cross country. We were essentially running against future Olympians.

The course itself was well-built and challenging. Not only was it incredibly well-kept, as there were no holes anywhere, but it was also eye-catching and engaging; I never got bored while running it. “The surface of the course was like running on a golf course,” said sophomore cross country player Jacob Humphrey, attesting to the quality of the OSU’s facility. The course consisted of many hills of all different sizes, including one very steep hill, two that would be best described as moderate, and one extremely long hill with a slight incline.

As far as SNU’s performance was concerned, the women’s cross country team ended up finishing 19th out of the 20 teams competing for the 6K, while the men placed 25th out of 27 teams within the 8K. Sabbatha Taylor, a senior, finished in 180th, with the fastest time for Southern Nazarene University’s women, while William Ramirez, a sophomore, finished first for the men in 208th.

I, for one, was happy to finish the race and to not be in last place. There was one runner who passed me with about a quarter left in the 8K race, but I stayed on him and then passed him in the last straightaway.

As sophomore cross country runner Joel Haynes stated, “It was a very tough course, but it was also a very fun course.”