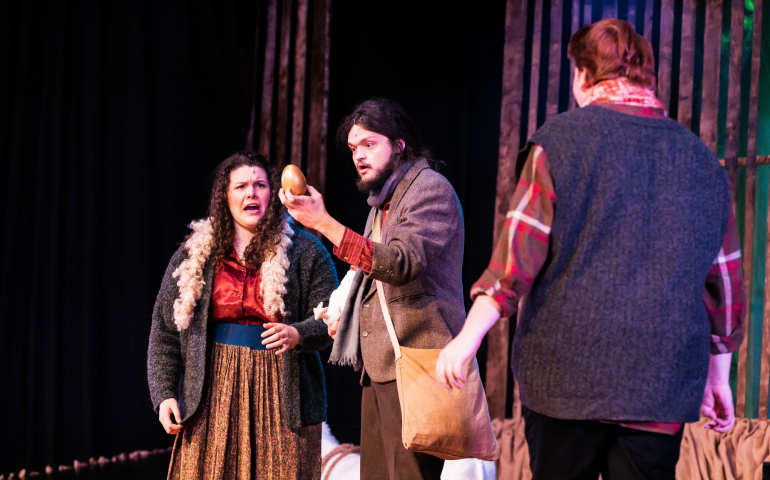 After two years since the last musical, SNU School of Music presents their latest production,  Into the Woods! An abundance of hardworking people on and off the stage has made this show possible. Now it is time for the community to come together and enjoy this show live in person.

Opening night was Friday, February 25th at 7 pm following two performances on Saturday, February 26th at 2 pm and 7 pm. These showings were held in Herrick Auditorium on SNU’s campus.

Into the Woods’ storyline revolves around a Baker and his wife who want to have a child, Cinderella wanting to go to the King’s Festival, and Jack who wishes his cow would provide milk. When the Baker and his wife find out they can not have a child because of the Witch’s curse, they set out on a quest to break the spell. The group has to come together to save themselves and the kingdom but not without some sacrifices.

Playing the role of Little Red is SNU Junior, Lindsey Mears. “It’s been exciting to play Little Red!” says Mears. “I haven’t played a child before so it’s been something new to try and play around with. She is such a sassy little girl that has many emotions.”

Aric Ferguson, a Senior at SNU, plays the role of Jack. “This is my first time playing a leading role,” says Ferguson. “It’s been very intense but still has been fulfilling and exciting. Jack is an innocent character that has his head in the clouds but goes on his own journey in the show.”

Both Mears and Ferguson expressed how much it means for the community to come and support the show. “Live theater is such a nuanced art form that you can’t experience over a screen,” says Ferguson. “A lot of people have worked really hard over the past two years to put on this show.” Mears agrees with Ferguson saying, “It’s going to be amazing with the perfect cast where everyone is so amazing.”

There are so many wonderful people on and off the stage that make up this show including director Elizabeth Dragoo, Assistant Director and Set Designer, Will Dougherty, music director Rebekah Ambrosini, and conductor Jim Graves just to name a few.