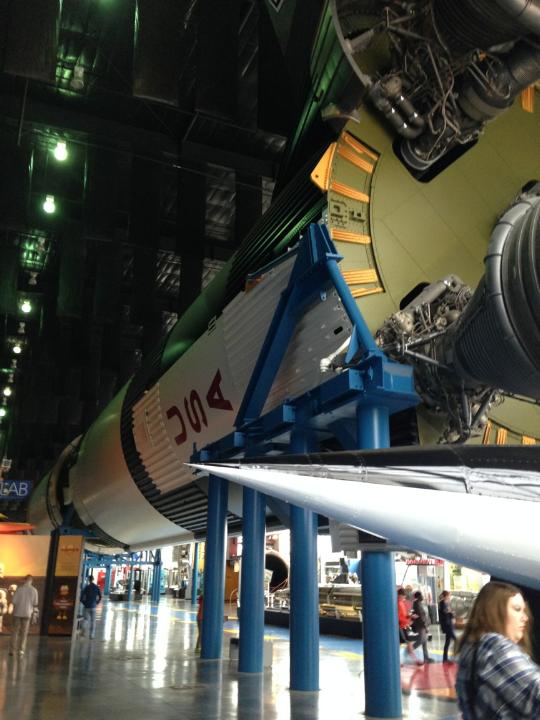 On day one, Rhodes and Galbraith toured the Marshall Space Flight Center and later the University of Alabama to see their Space Hardware Club.

Galbraith said, “We toured several different labs and heard from scientists working on projects for the Space Launch System, materials manufacturing, environmental testing and so much more. Students from the club took us on a tour of all of their facilities and told us about the competitions and the work they do that is funded by the Alabama Space Grant.”

The next day, they went to the U.S. Space and Rocket Center which houses exhibits on the space race, rocket development, construction and demolition and military equipment of the future. Galbraith and Rhodes got to see an IMAX film about deep space exploration.

Galbraith said, “My favorite part of the day was the giant game of jenga that was played by a few of us in the construction/architecture exhibit. We may or may not have broken the record for the tallest tower built with their building blocks.”

The final day of the trip was a morning hike to Burritt on the Mountain which was Huntsville’s first museum. In the afternoon, they went to Huntsville Museum of Art.

Rhodes said, “I found the trip very enjoyable and beneficial. There was an opportunity to visit with students from other Oklahoma universities that participate in the NASA Space Grant. It was a great networking opportunity.”

Galbraith said, “This trip helped to reinforce my desire to be a scientist. Recently, I had been questioning my career/school choices, but our visit to Marshall encouraged me to continue on my path, knowing that there will be jobs out there for physics graduates, jobs that seem exciting and actually affect people’s lives. For instance, in one of the labs at Marshall, a man was telling us about how he and his department had developed sensors to assist the space shuttle with automated docking to the ISS. The same technology has been adapted for many other uses, both in space and here on earth. I really look forward to being able to make my own impact in the scientific community.”

Southern Nazarene University has been a member of the OSGC since 2002 and has granted more than 120 financial awards to SNU students totaling more than $150,000.