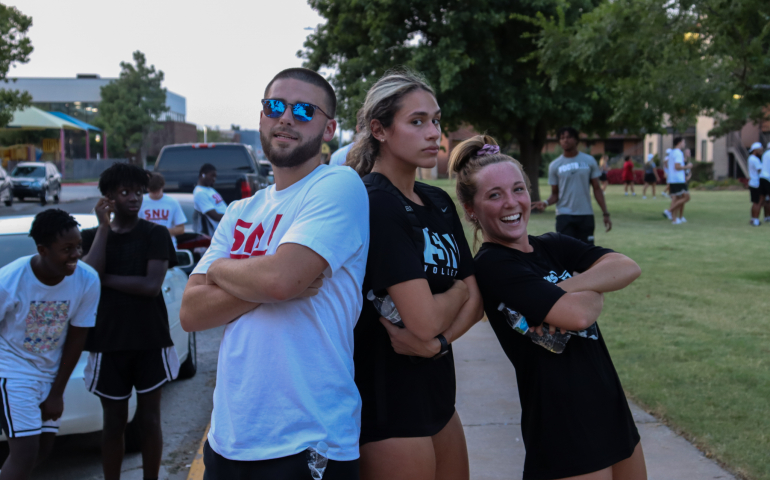 The annual Storm Warning event was held this past Tuesday on Bracken lawn. Storm Warning is held to show support to the student athletes on campus. There were games like spikeball, 9-square, basketball and soccer that students could play with each other for the first hour. The energy at that event was unmatched; all students were excited to return to normal athletics this semester.

Once the sirens went off, all of the students gathered around the stage to hear Danny Thomason, the SNU Athletic Director, speak. He led some games of “Simon Says” and the junior class won this year. After all of the games, students were introduced by teams. Each team had cheers, skits, and skills prepared to show off in front of the student body. The entire student body was energetic and excited to cheer on our student athletes this semester.

Riley McCubbins, a senior football player, said that his favorite part of Storm Warning was dunking Danny Thomason. McCubbins explained, “Adding a couple more events to pass the time would be nice to have, since the actual event didn’t start for another hour.” McCubbins said that he thinks out of all the students, the freshman had the most energy at this year’s Storm Warning.

Natalie Jones, a junior softball player, talked about her favorite parts of Storm Warning. Jones said, “My favorite part of storm warning was seeing how hype each team got when they were being introduced. It really shows the players’ personalities.” She talked about looking forward to having the community of athletes come together as one for a fun event that is catered toward athletes. Jones states that “In future years I would want to see more of an interaction between the different teams so that everyone can meet each other, especially the freshmen.”

Even if you did not come out to Storm Warning, make sure you come out to show your support to our athletes this semester! The schedules for all sports are on the SNU Athletics website. Roll Storm!