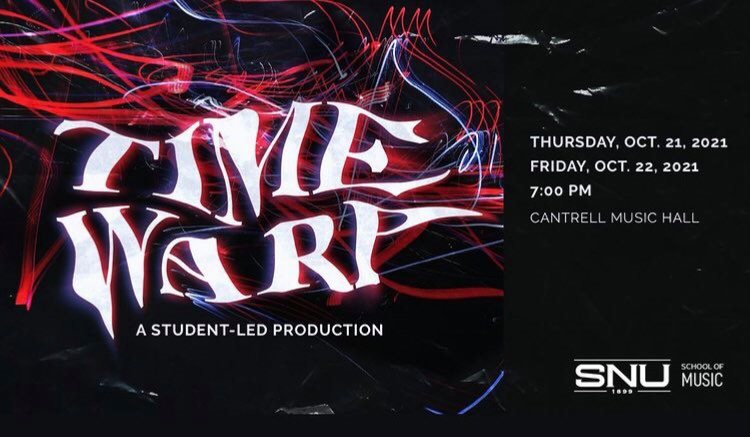 SNU School of Music is traveling back through time to excite audiences with their upcoming student-led production titled “Time-Warp.” This production is entirely made up of student-led directors and performers who have been tirelessly rehearsing since the beginning of the semester. Now the community of SNU can experience it this week on October 21st and 22nd at 7 pm in Cantrell Hall.

Lindsey Mears, a junior at SNU, is one of the directors and performers in the production. In the early stages, Mears and the other directors were trying to figure out what theme they wanted to showcase. “Dr. Graves actually gave us the idea of jumping through time periods,” says Mears. “He suggested that we could go through the centuries but yet we don’t have to do them in order.” Mears continued to say, “we kinda took (the idea) and ran!”

The show includes different styles of musical theater songs that will keep the audience entertained and on the edge of their seats. Mears says that the Broadway songs they are performing are “all over the spectrum.” The students will perform songs from different stylized musicals such as Spamalot, Thoroughly Modern Millie, Waitress, and more!

Daniel De Lige, a freshman performer in the production, expressed his thoughts on the production. “I’ve enjoyed it. It’s fun to be challenged,” says De Lige. “I didn’t really get to do this a lot in high school so I’m happy to do it now.” When asked what his favorite number to perform in the show is, De Lige says, “‘Once and For All’ (from Newsies) because it’s just a big number.”

Both Mears and De Lige expressed how important it is for the community to come out and watch them perform. De Lige says, “We have worked really hard and we are excited to let people experience it.” Mears says, “It would be a huge support if you came out and supported your peers. We put a lot of work into this and we want to have a crowd to show it to. If you like musicals, you won’t be disappointed!”

There will be two showings of the production in Cantrell Hall on October 21st and October 22nd at 7 pm. There is a suggested but not required donation of $2 dollars that will go towards the upcoming spring musical. Go out and support your peers because you won’t be disappointed!