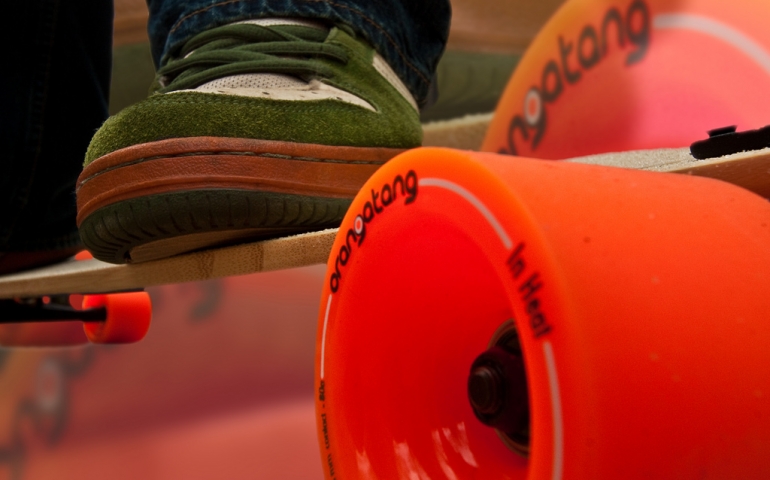 There are many different trends at SNU. Whether it is gathering a bunch of friends to see the midnight premiere of a movie, dressing up for different sporting events or laying in a hammock somewhere on campus, there is not a more popular trend than longboarding.

If you’re on the way to class or walking toward chapel, there’s a good chance you will see someone riding a longboard. Guys and girls alike have found a nice way of transportation from point A to point B. Some are more experienced than others, but nonetheless, there’s a growing number of longboard appearances around campus.

Connor Mackenzie, a junior transfer student from Tulsa, has been riding for a little over a year and elaborates on why he first purchased a board.

“Heading into college, I was really interested in getting a longboard because it seemed like the thing to do for a lot of college students. It [also] seemed like an easy alternative to getting around campus,” Mackenzie stated.

Some common misconceptions of longboarding are that it’s a thing only hipsters like to do or that it takes a long time to learn how to ride. I would have to argue that those are false accusations. I know several people who enjoy riding a longboard because it is both fun and relaxing. There’s nothing complicated about it. When I’m not out with friends on our boards, I choose to ride to relieve stress. When it comes to riding a longboard, you have the freedom of riding at your own pace.

The hardest part about learning how to ride a longboard is balance. Longboarding is quite similar to skateboarding and snowboarding. Riders control their direction based on how much weight is shifted from each foot as well as the way they lean their body. Like all things new, it simply takes practice. I learned how to ride in just one day, and the more I kept practicing, the easier it became.

When I asked Mackenzie if he noticed a “longboard culture” when he got to SNU, he replied, “There’s definitely a culture of boarding. Even in the first couple months of school, people were wanting to get together and ride around downtown, whether it [was] at a parking garage or wherever there [seemed] like a fun place to go. Lots of people like to ride, and it’s a cool way to hang out and build relationships with people.”

So, next time you see someone zooming past you on campus, take a second and consider how fun riding a longboard can be. More and more riders are popping up around campus, and it’s never too late to pick up a board for yourself!