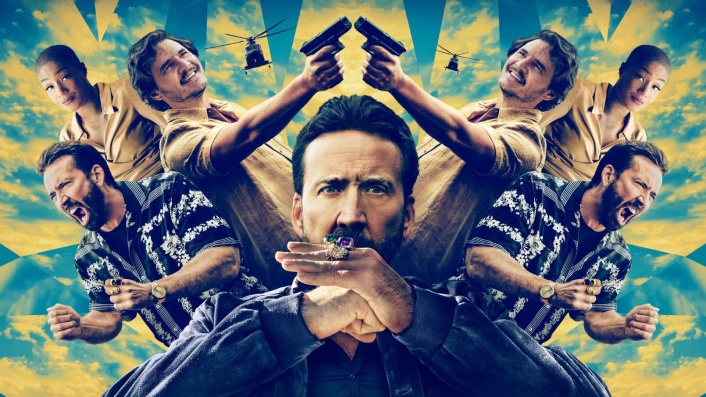 Who doesn’t love Nicholas Cage? The famed movie star made his most recent appearance on the silver screen this month with his newest movie, “The Unbearable Weight of Massive Talent”, alongside Pedro Pascal and Tiffany Haddish. Directed by Tom Gormican, this movie takes a dive into something we as an audience don’t see too often. This movie is about Nicholas Cage playing himself as his life as an actor takes a surprising turn.

The plot follows the story of Nick Cage struggling to find a role in Hollywood. He takes up a birthday party invitation by a wealthy man Javier Gutierrez (Pedro Pascal) in which they decide to make a movie together so Nick can stay in Spain longer with Javi. Nick has to make a difficult decision that could endanger his family, lose a friend, or end his acting career in this dramatic comedy.

The movie is funny. There are many moments throughout the film that had me rolling with laughter. The chemistry between Pedro Pascal and Nicholas Cage makes this movie worth the while alone. The film had the feel of a buddy cop movie, but instead of cops, there’s a struggling actor and an obsessive Nick Cage fan. The plot of the movie I found to be a bit predictable but not boring as the humorous aspects of the film helped cover the predictability of the plot.

There wasn’t much about this movie that I didn’t enjoy. The acting performances in this movie are superb, especially for the members of the main cast. They bring forth this excellent performance of a cynical, self-centered Hollywood employee that views themselves higher than everyone else. It adds to the comedic aspects of things because in the film an actor is asked to do things that no normal person can do. And Nick Cage performs beautifully in that aspect of the film.

The one thing I can say is that this movie is not meant to be taken in a serious manner. It is a comedy that is meant to make you smile and laugh, rather than making you nervous or intense. After all, It is a movie about Nicholas Cage playing Nicholas Cage, trying to revamp his reputation as an actor while also fixing broken relationships with his family, and himself at the same time.

I personally really enjoyed watching this movie, it was a great time to relax and get a few laughs in. So if you are feeling down, or stressed with finals approaching, take some time to laugh at this movie, it is definitely worth the watch.