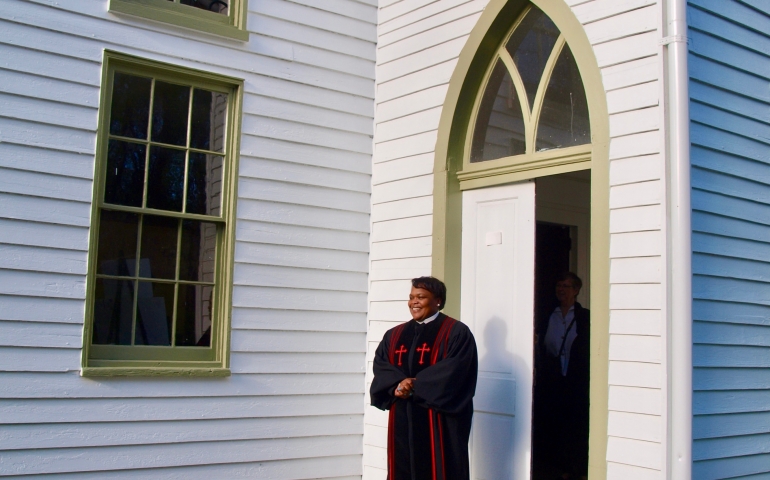 Just a few weeks ago, the Christian social media world was in an uproar over comments made by American theologian John MacArthur against Beth Moore, a prominent Christian speaker and teacher. An organization called Reformation Charlotte hosted an interview with John MacArthur and another male theologian, playing a “word association” game in this interview. The interviewees were asked to say the first thing that came to mind upon the mention of certain words or topics.

The interviewer started with “Beth Moore,” and MacArthur’s response was “go home!” The audience erupted with applause and a bit of “oooh burn” sounds. The interviewer asked MacArthur to elaborate on that a bit, to which MacArthur said, “There is no case that can be made biblically for a woman preacher. Period. Paragraph. End of discussion.” The crowd erupted yet again in applause and joyous yelling. To hear the rest of the interview, click here.

Beth Moore has been on the receiving end of a lot of criticism lately, especially from the Southern Baptist Convention. In June of 2019, Moore, being raised in the Southern Baptist tradition, spoke up about the misogyny she saw in church and how it was harming the gospel message. The Southern Baptist Church says this about women in ministry: “…we encourage the service of women in all aspects of church life and work other than [emphasis added] pastoral functions and leadership roles entailing ordination.”

How does Beth Moore feel about John MacArthur’s statement? “I did not surrender to a calling of man,” Moore said. Moore continues to speak out concerning her call to ministry and continues to receive backlash from many for pursuing her calling.

Those who have tried to silence Beth Moore have failed as social media is buzzing with women in ministry all over the world, saying that they are “not going home.” Someone even created a Facebook profile picture frame that says, “Not going home, I support women clergy.”

Being influenced by other denominations and secular culture, the Nazarene Church has struggled to live into this original calling of affirming women. While our manual states that women can and should be ordained ministers, there are many congregations and districts that struggle to accept this as biblical. The affirmation is stated in our doctrine, but is not always lived out in our communities.

As I am personally a woman studying to be a pastor, I will echo the words of Beth Moore: “I did not surrender to a calling of man.” I was not called by a male theologian to follow Jesus, nor was I called by a male theologian to pursue ministry. It is God who calls. I will also wholeheartedly agree with Dr. Middendorf—throughout the Bible, there are women who teach, preach and lead. There is no place for debate about this.

More important than any other person, I will respond to the invitation in the words of Jesus: “Then he said to them all, ‘If any want to become my followers, let them deny themselves and take up their cross daily and follow me.’” Luke 9:23 NRSV.

We are all called to follow in the way of Jesus, and I hope that you all discover what that calling might mean for your life. As you explore, remember the words of Paul to the church in Galatia:

If you are interested in learning more about the equality of women in the church, find a female theology major on campus and ask them about their call. You can also check out these websites:

(Photo by Diane Helentjaris on Unsplash)