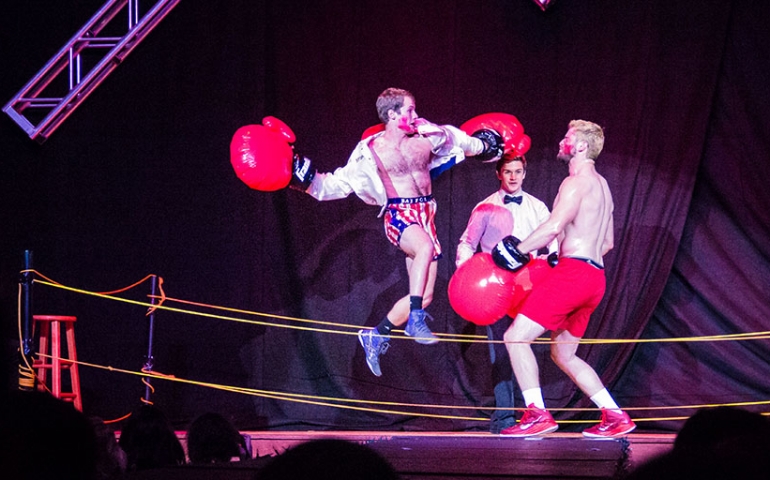 Southern Nazarene University’s annual “Who’s The Man” show will take place Friday, April 21 at 8:00 p.m. in the Herrick Auditorium. The junior class has planned the entire event and each year they alternate between a variety of different shows, such as “Who’s The Man” or “Lip Sync.” However, “Who’s The Man” will happen every spring.

Junior Class Secretary-Treasurer, Audrey Hamm stated, “‘Who’s The Man’ isn’t necessarily a pageant, but it’s more of just a show. It will consist of eight guys who show music videos they made, perform a skit with their friends and participate in improv scenes with the improv team.” The 70s is the chosen theme for this year’s “Who’s the Man.” It will also include audience participation between skits.

There will be two men from each class performing in the show. Andrew Marston and Josiah Evans will be representing the freshman class. Micah Spell and Lewis Boatright will represent the sophomores. Ngozi Gregory and Tanner Wilson will represent the junior class, and Seth Shepard and Josh George will represent the senior class. All of these men were nominated by their friends and fellow students, and they were then asked to go in for an interview with SGA members.

“Of course I am going to ‘Who’s The Man!’ I love going to fun events on campus. I’m super excited to see what they do this year,” Sara Campbell, a junior, stated. Anyone is welcome to come watch the show for a small price of $2 a person or for free if you have a Crimson Card. We hope to see every student, faculty and staff member there!

Summer Showalter is a Junior Mass Communications major from Bethany, Oklahoma. She loves SNU and is excited to write for The Echo this semester. In her free time, she loves working out, hanging out with friends and family and dancing to 90’s rap songs. Her future plans are to become a broadcast journalist one day and travel the world.