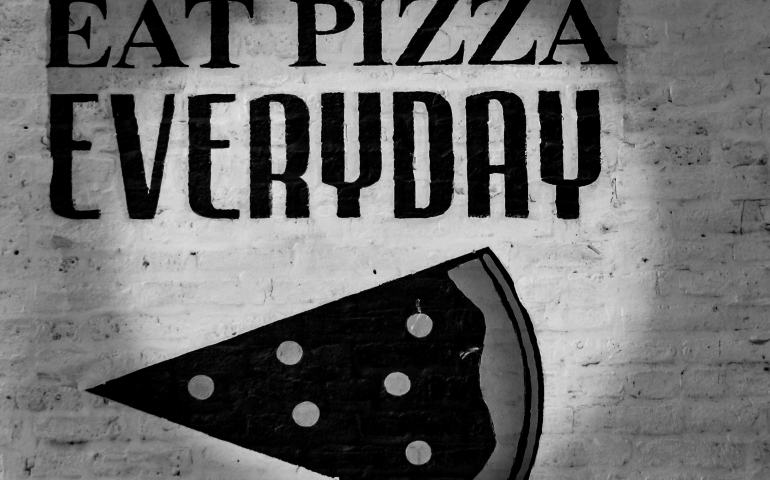 Many students at Southern Nazarene University are big fans of Empire Slice House. This past week, the pizza joint known for its crazy slices moved locations. No need to worry though, they have only moved right down the street from the original location where we fell in love with Empire.

The building that Empire started out in was converted from a laundromat about five years ago. September 21st was your last chance to eat in the original location before the big move. With all the memories left behind, people wondered, “Would the new location live up to the name?”

In my opinion, the new location certainly lives up to the Empire reputation. Even on a Saturday night, our table of 4 was able to find seats with less than a five minute wait period. The staff was friendly and quirky as ever as we were escorted through the much larger dining area to a table near the kitchen.

Like the last location, the walls were plastered from floor to ceiling with iconic music and movie posters from past to present. Artists such as the Beatles, Katy Perry, and David Bowie accompany you as you munch on your pizza in either the indoor seating or the outdoor seating that is now available.

Alyssa Flesher visited the new building this past weekend and said, “I love the new outdoor patio space with the amazing geometric mural! The new location has a sleeker design.”

Junior Ally Ford enjoyed some pizza on Saturday night at the new and improved Empire location. When discussing the atmosphere at the new Empire Slice House, she commented, “The new location was very neat and spacious. It still gave off the same vibe the previous building did.”

Surrounding Empire is an interesting mixture of neighbors. From second-hand shops, a yoga studio and Roxy’s ice cream, someone could easily spend an afternoon enjoying the plaza district.

Not only are the buildings interesting, but the art draws in crowds as well. Colorful murals are constantly being created and displayed throughout the plaza district. Pedestrians cannot help but take a few minutes to stop and stare.

Someone may wonder, “Why did Empire move only half a block down the street?” Well, in response to a lot of questions, the famous pizza joint stated, “A few feet added to the ceiling and a wider dining area is what we needed to make it a better working environment for our staff, as well as more available seating for the clientele! Now we get to serve even more of the same pizza in the great Plaza community! Same vibe. Same love.”

With all the crazy pizza slices available, it seems the last great debate is which flavor is the best. Ford stated, “My favorite would have to be the MCA, a classic choice.” Other choices include Foghorn Leghorn, Brussell Westbrook, Fat Tony and Figgy Stardust. Some of the interesting toppings include sriracha, figs, brussel sprouts, and even brisket. Of course, the pepperoni and cheese are out of this world as well.

Located 20 minutes away from Southern Nazarene University, Empire is worth the drive over. Grab a couple friends and go buy a couple of slices. Ellie the pink elephant will be waiting outside to greet you at their new location.

(Photo by Sinan Helfenstein on Unsplash)